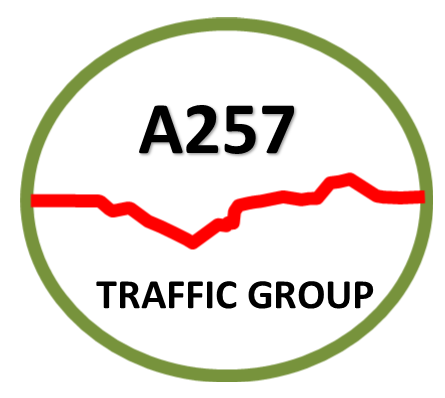 MEETINGS are held every other month in January, March, May, July, September and November with Full Group Members attending every other meeting in January, May and September only. These are not public meetings. Other Councillors and/or interested parties are invited to attend according to the agenda.

A257 PLAN
The Group produced and launched the ‘A257 Plan’ in 2018 which documents issues surrounding congestion, accidents and pedestrians, providing fact-based information and proposals for improvements on the road to make it safer for all users.

LATEST UPDATES AND INFORMATION
MEETING UPDATE: Saturday 14 January 2023 FULL GROUP MEETING
Updates were received from Cllr Mel Dawkins, KCC Member for Canterbury City South via her written report and in person by Cllr Sue Chandler, KCC Member for Sandwich.
Cllr Dawkins' report gave  an update on the Longport scheme including concerns with speeding on St Martins Hill; and information on residents' request for a Vehicle Activated Sign (VAS) on Stodmarsh Road.
Cllr Chandler noted information regarding Ash village and Shatterling.
The Group discussed the Canterbury District Draft Local Plan to 2045 and agreed to send a response to the public consultation noting the Group's concerns about the significant and detrimental impact on the A257 and feeder roads from proposed developments and road changes, including the proposed Eastern Movement Corridor.
Updates from Group and Village representatives were received from Littlebourne, Shatterling, LSRCA, Bramling, Preston and Wingham.
The lack of working cats eyes along the A257, especially on the Ash bypass, were noted as was the poor state of white lining.  Cllr Chandler noted all such issues should be reported on the KCC online reporting tool: https://www.kent.gov.uk/roads-and-travel/report-a-problem
Next Meeting Date: Saturday 18 March for Core Group Members only.

CONTACT THE GROUP
The Group Administrator is Kerry Coltham, the Wingham Parish Council Clerk. Please use the CONTACT PAGE for your enquiry

Proud to be serving the residents of Wingham
Contact US